A Day in the Life of a Coffee Picker

It’s mid-December, 4:30 am, and though the sun has yet to show its face, Carlos Ferrey is up. Before him is a 20-minute ride in his pickup truck into the town of Pueblo Nuevo. There he will pick up about a dozen of the workers who will harvest the coffee cherries at El Recreo Coffee Farm.

The road is bumpy, to say the least. There are sections that are paved, but the parts that aren’t are treacherous. And the going is slow with the bright lights on, because blowing an axle would mean losing a day of work.

By 5 am, Carlos arrives at the pick-up spot in the little town. He greets each of the workers as they hop into the bed of the truck.

Some of have brought their children. Those that haven’t get a special exhortation to go back and get them… not to work, but to play. The farm school serves more as a summer camp during picking season (Nicaragua’s summer, our winter). There’s a little bit of school, a whole lot of recess, and most importantly, three square meals for the kids, and a teacher to watch over them as they play.

Arriving at the farm, the workers join with the permanent crew who live on premises in the dorms or family housing. For now, that totals about 30 people, but by the time harvest is in full swing in January and February, that number will swell to more than 60. 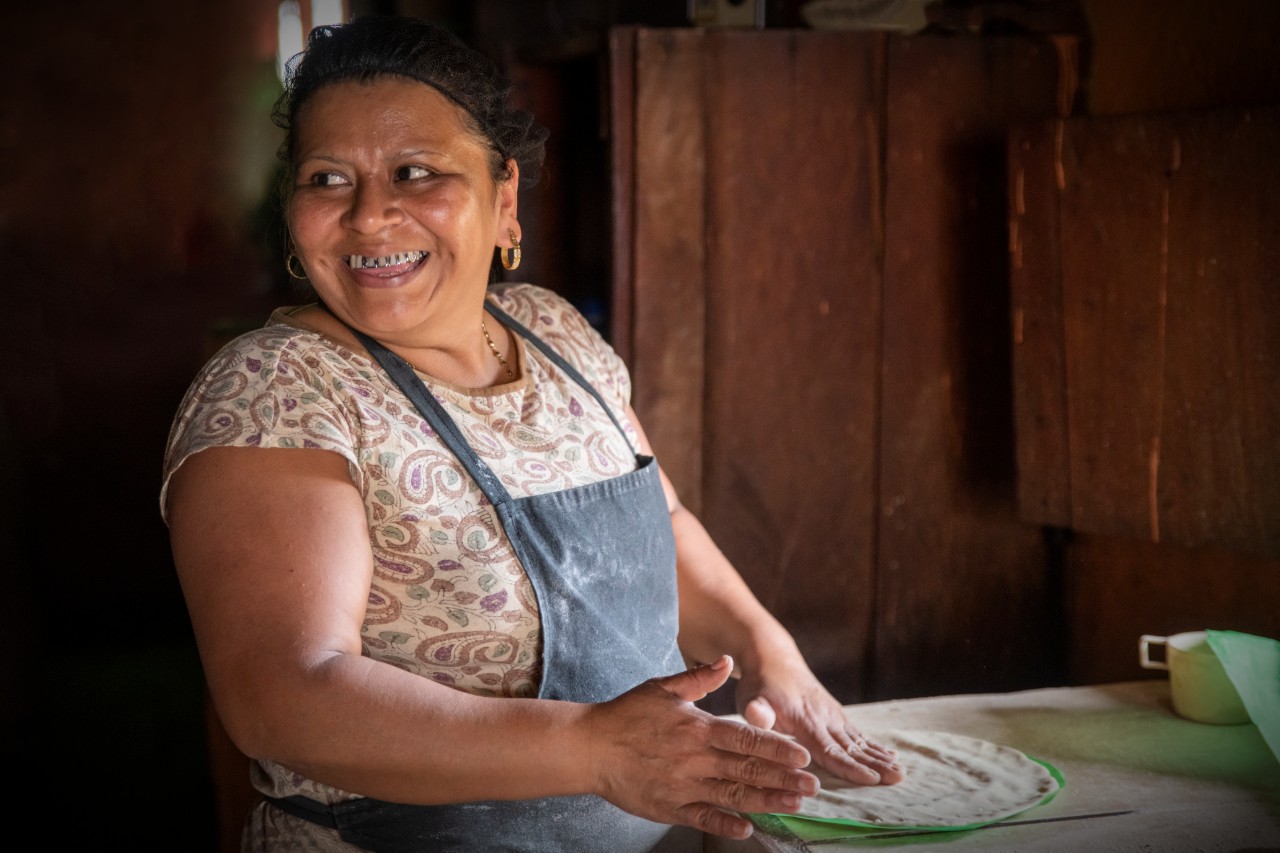 Juana hand makes about 200 tortillas a day to feed the farm workers and their families. (Photo by Kim Zahnow)

Feeding the Farm Family of Workers

The men and women who will spend their day in the field file down to the kitchen where Juana has been pounding out tortillas since 3 am. They line up for their breakfast… usually a tortilla, with a hearty portion of beans, rice and cheese, and a mug of farm “coffee.” It’s not what most of us would recognize as coffee, but it is the preferred morning drink on the farm… coffee grounds boiled with lots of sugar in a big pot over an open fire for hours. It tastes nutty, almost like chocolate.

Breakfast in their bellies, they walk up the hill to the collection point to pick up their gear:  a basket, that gets secured to the body with a sash that ties, and burlap bags to aggregate their days work.

And then, as the sun is peaking out above the mountains, work begins. 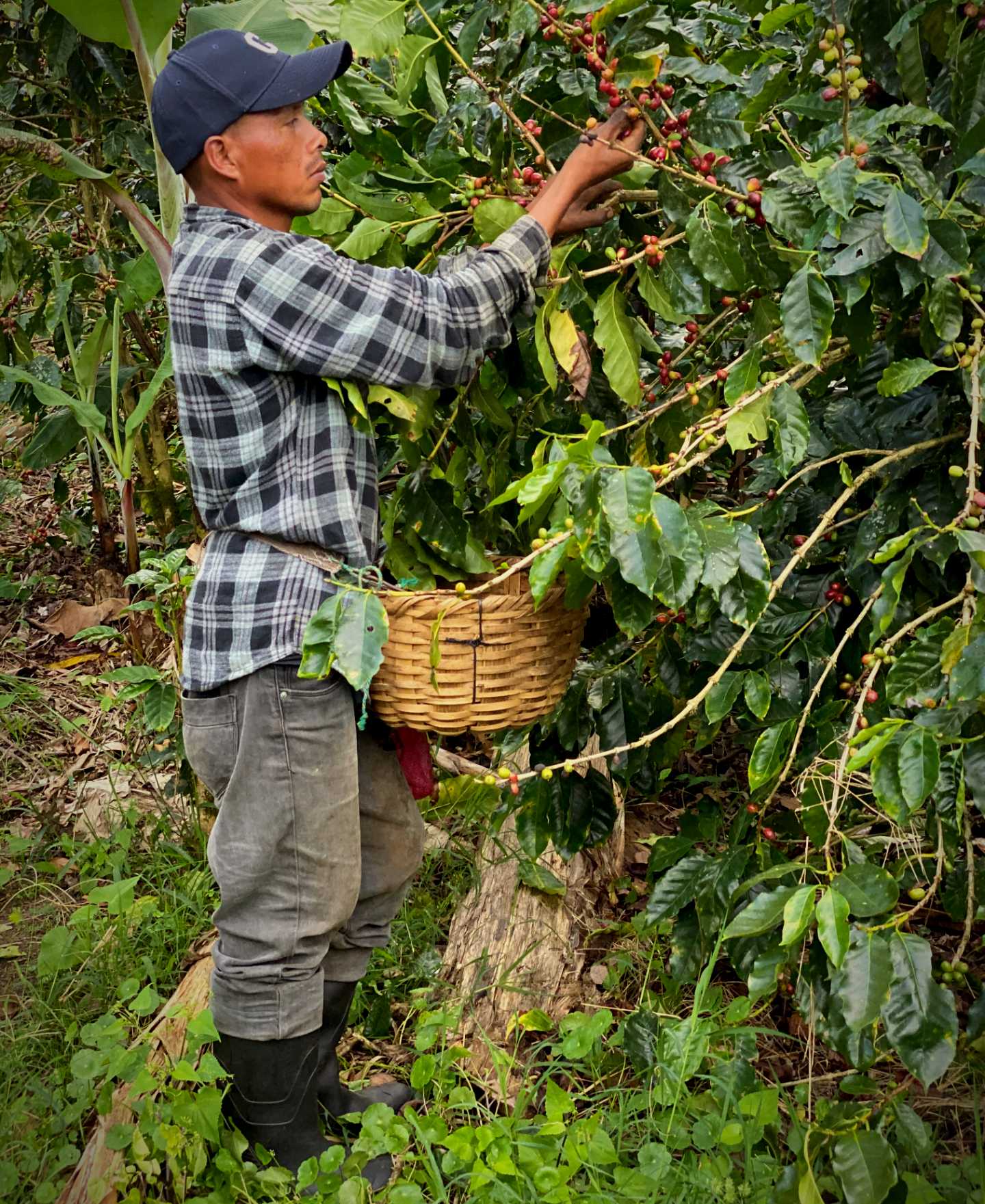 It’s tricky, picking coffee. You twist the ripe red cherry, to the left, and carefully pull it off the branch, being sure to leave the green bud behind it still on the tree.  That’s the next coffee cherry, the next harvest, and harming it means one less cherry to harvest later.  Pickers are paid based on the volume they gather, so speed is important.  But their accuracy and care is what ensures that there will be a cherry to pick next time.

Of course, not all of the cherries ripen on the coffee tree at the same time. So they must also be sure to pick only the ripe red berries, leaving the green to ripen on the tree. Each coffee tree is “touched” about three times over the course of the harvest season to make sure that no cherry is left behind.

The cherries go into the basket that is strapped onto the body. When the basket is full, the picker empties it into a burlap bag. The average picker will harvest about 70-80 pounds of coffee cherries in a day, but at El Recreo, they have some pickers that will do twice that.  It takes about five pounds of cherries to produce one pound of roasted coffee. That’s comes to about 30 cherries per eight-ounce cup. 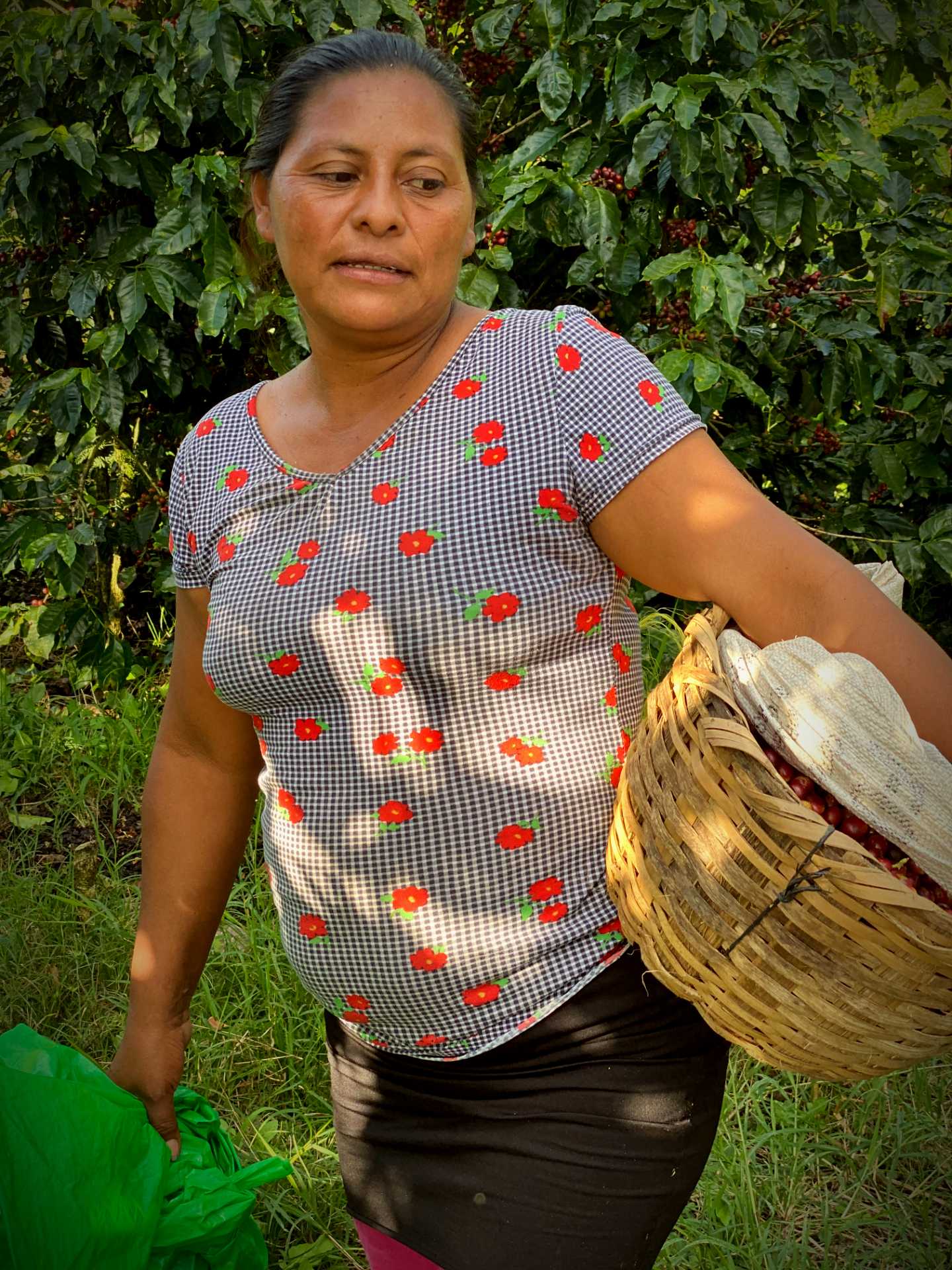 Maria Isabel has worked at the farm for several seasons.

Most of the men and women in the field have been picking at the farm for many years and know the fields well. Even so, they must make way their way carefully through the underbrush. The farm does not use chemicals to control weeds or bugs, and there are plenty of both to navigate. Even though the temperature can rise to north of 80F, the trees that shade the coffee provide some relief from the sunshine.  Still, many workers wear long sleeves to protect themselves from bugs and scratches.

Lunch is delivered to the fields at noon and there is a welcome pause in the day’s labor. Many of the workers are related or have been friends working together for years, and the conversation is usually lively.

After the break, the workers go back to the fields through the afternoon until the horn rings out at 4:00 pm to gather for the weighing process. 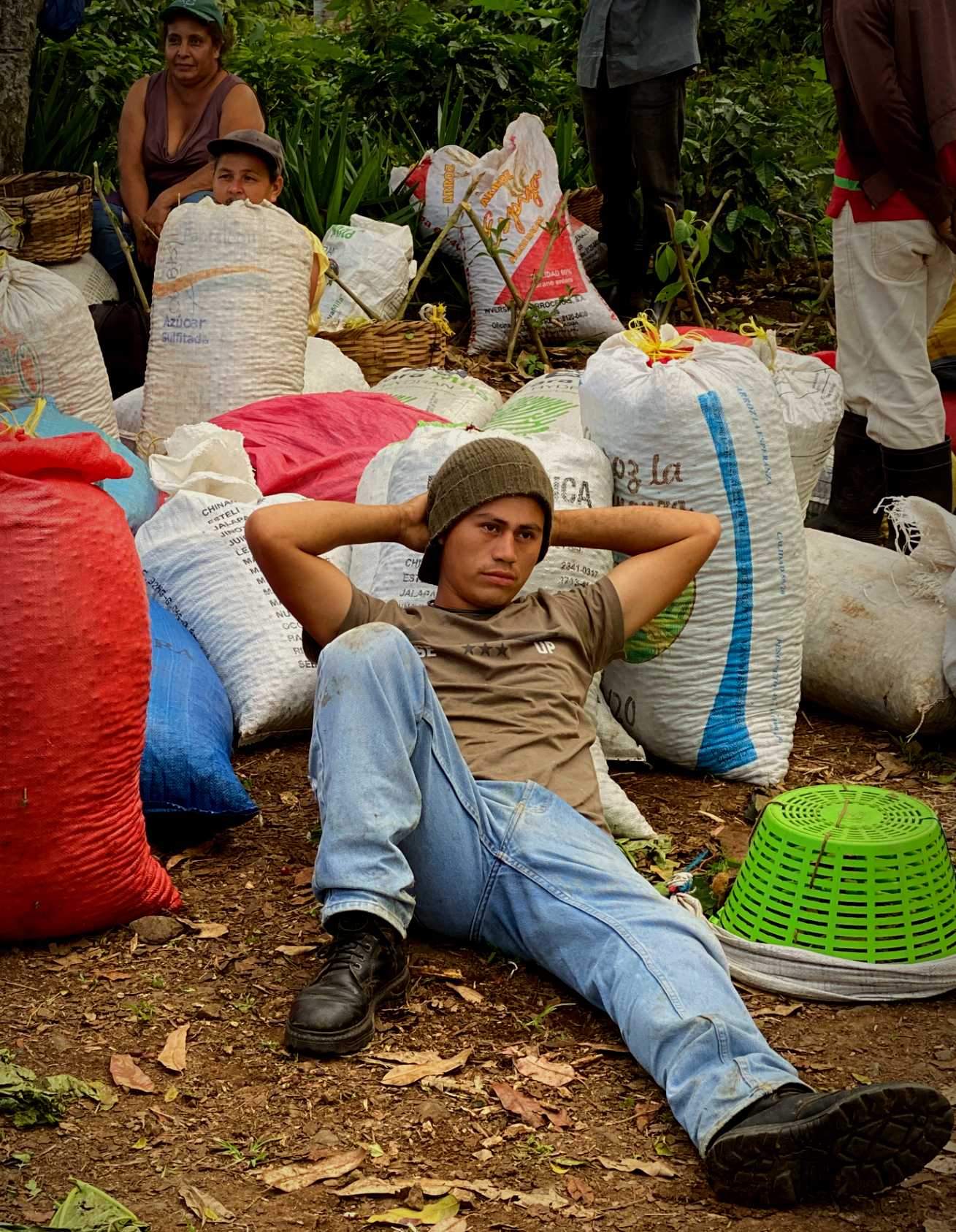 Each worker brings their burlap bag or bags, one at a time, onto a large tarp, where the bags are emptied into a bucket. You can watch the process on the video below.

The average picker harvests seven to eight buckets a day. Each bucket holds 8 pounds of coffee, which is worth 35 Cordobas to the worker. That’s about a $1.00 a bucket, or $7-8 a day. It’s important to know that their rate is 10% higher than the regional average. Plus, the workers get three meals a day, access to medical care and free education for their children, and many also stay on the farm for free. All of which puts El Recreo far and away above most coffee farms in the region in terms of the care they take of their people. 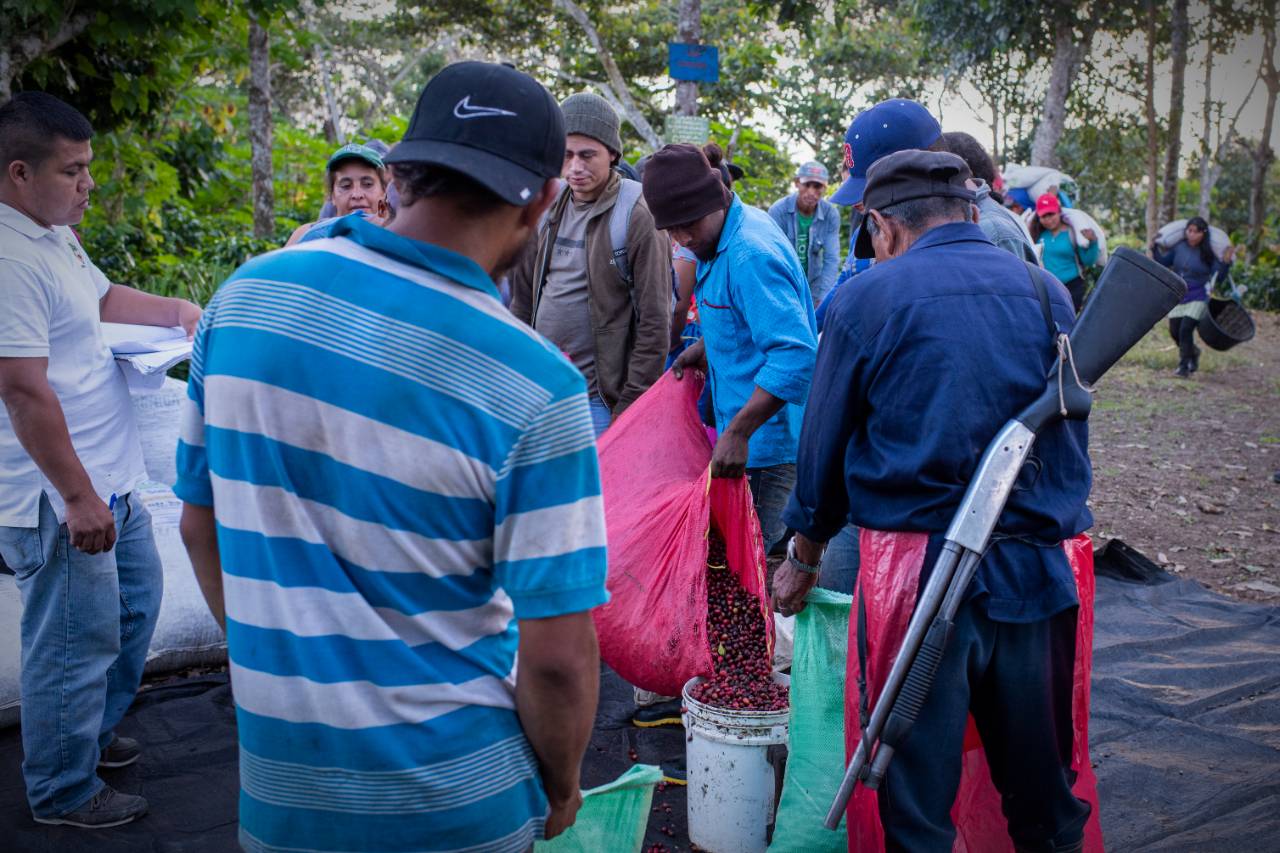 After all of the bags are emptied and the buckets are counted, the coffee is loaded onto the back of a truck where it transported to the wet mill… which is a story for another post. (READ: The Journey of Coffee) The workers, meanwhile, head back down to the farm’s kitchen to pick up their dinner and collect their children.

By about 6 pm, they are climbing back into the bed of Carlos’ Pick-Up truck for the ride back Pueblo Nuevo. Our friend and photographer, Kim Zahnow, took that ride with the workers one night, and was amazed at the level of conversation and cheer after such a long day in the fields. With a wave a honk, Carlos points the truck back in the direction of the farm, and heads home for his own dinner.

Heather Zink, our friend and fellow traveller (and BIGGBY Coffee Process Coach) caught the load out (below) at the end of a long day.