About a month ago, riding down a Texas highway in a rented SUV, I pulled off an impossible miracle. I found two COVID-19 vaccine appointments for my husband Bob and me in our home county of Allegan, Michigan. It was late February, and we didn’t think we had a chance of getting vaccinated before summer. But all of a sudden, the possibility of a post-COVID world began to shimmer on the horizon. And I ugly cried. I mean, I REALLY ugly cried… the kind where your shoulders heave, your face contorts, and you risk giving yourself whiplash.

Bob, somehow, managed not to crash the car. But he was mystified by my reaction.

The only way I could explain it is that I didn’t fully understand the weight I had been carrying around until that moment. For the better part of a year, I had been ceaselessly patrolling the borders of my little world like a German Shepard, constantly vigilant, trying like hell to keep everyone I love safe. It occupied every minute of my day, awake or asleep. It haunted my dreams. And just like that, I could see the end of it.

The day we got our first shot was thrilling. We were two hours early – quite the feat, given that we started the day three states away. Standing in line with smiling strangers at the vaccine clinic, we could all feel the collective jangled electricity of hope. Then one anticlimactic poke in the arm (did it really take?), and off we went.

Four weeks to the next shot, six weeks to MAX VAX… and some semblance of a normal life, albeit with masks and social distancing still the rule. We would be able to hug my mother-in-law, who was a week ahead of us in the vaccine timeline. We would be able to plan a trip to Chicago with our MAX VAXXED friends. We would schedule massages and (gasp) dinners INSIDE a restaurant. We could pick up where we left off with our mission at One Bigg Island in Space on the hunt for coffee farmers. The world would be our oyster again. Every cell in my body was thrumming with an ecstatic giddiness. 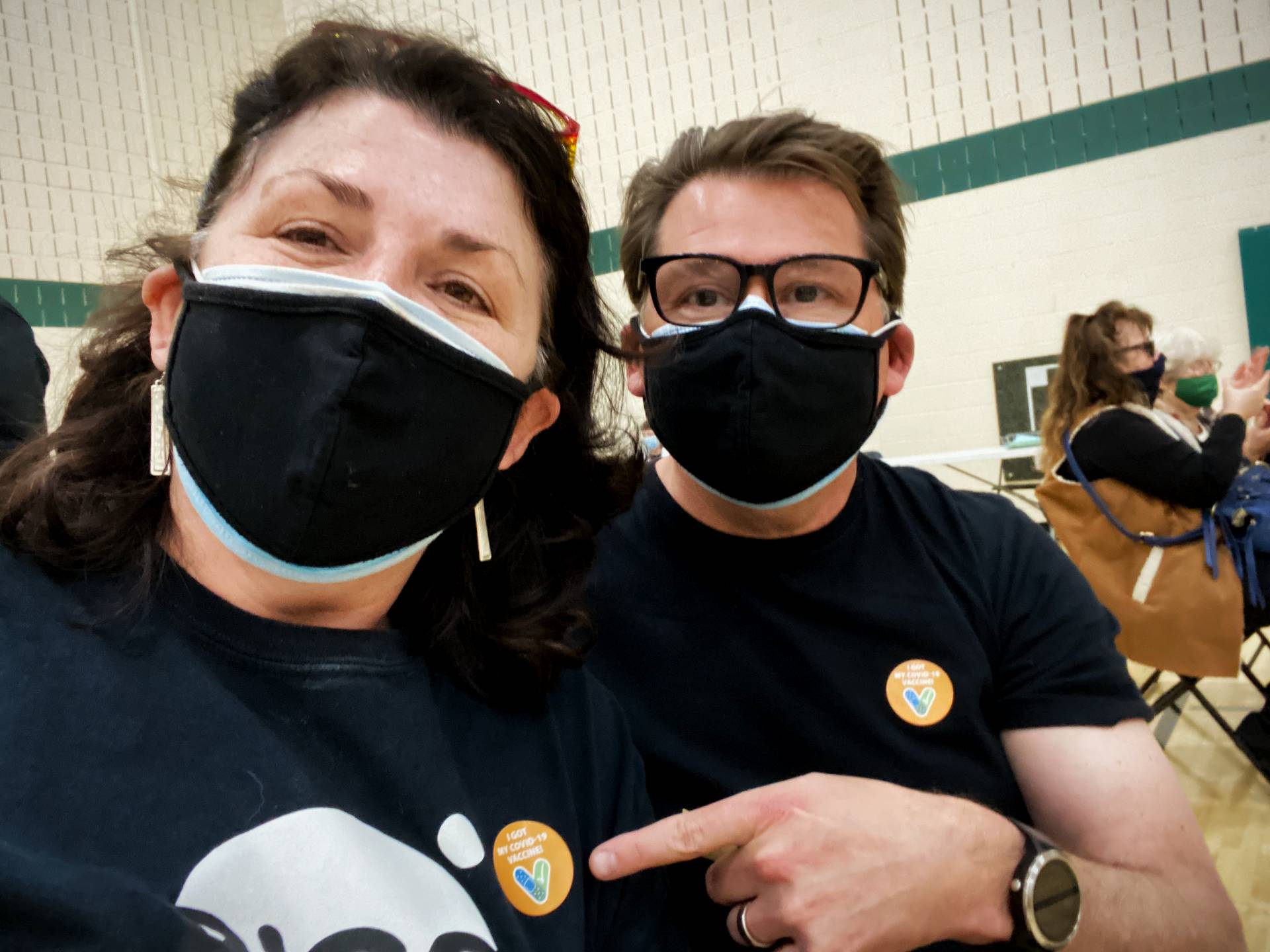 Now, two days away from our second shot, the reality is a little more complicated. Plans have been made, trips have been booked, and don’t get me wrong, I am really looking forward to my first massage. But my feelings are not as simple as I had imagined they would be.

There’s a shadow of a cloud hovering around the edges of this brave new world. I can feel the unease of it, quite literally, in my body. It’s settled into my left hip in the form of a muscle ache that I just can’t seem to shake. Bob feels it too. His sleep is fitful and brief. Occasionally, we have moments that we’re uncharacteristically prickly with each other.

So what gives? Why so glum, chums?

First, I don’t know how to turn off the snake part of my brain that’s been keeping me alive. My inner German Shepard is patrolling and panting like it’s April, 2020. I was in a store the other day, masked up and singing the “please don’t touch your face my friend” song in my head. I am, according to the research, at about 80% efficacy three weeks after my first dose of Moderna, so I should be good right?

I see a guy down the aisle stop in front of the mayonnaise display. He takes his mask off, sneezes all over the mayo, and then puts his mask back on again.

I can’t begin to describe the cascade of emotions I felt as I watched this horror unfold. First, ewww. That was gross. My heart rate sped up, and I felt a strong desire to bolt out of the store. But why? He was 10 feet away from me, I was double masked, and I had an 80% effective first Moderna shot under my belt.

It was hard to go from 0 to 60 last year when COVID-19 invaded our seemingly safe little world. It’s going to be hard to go from 60 to 0 now that the immediate threat is subsiding for the vaccinated among us. And while I very much want to be in a crowded room full of MAX VAX people listening to live music, I am afraid I’m going to feel like I’m doing something deadly wrong and dangerous. How long will it be until I can look at a throng of people and not see a threat?

Then, too, there’s something else tugging at me. I know too many people who have lost too much to this disease… loved ones, their health, businesses, jobs, their sense of safety. The people in my little world have come through relatively unscathed. And now everyone but our son is vaccinated, and he will likely get his this month. Yet as I write this, people are still getting sick out there… faster than ever, with the new variants. It takes some strenuous mental gymnastics not to fall down a hole of survivor’s guilt.

And then there’s this. Bob and I are spectacular partners in general, but especially when it comes to handling a crisis. In 2018, we were in Maui, Hawaii when everyone on the island got a text alert that there was an incoming missile attack and we should take cover immediately. It was the age of Trump and “Rocket Man” Kim Jung Un hurling insults at each other, and it wasn’t a stretch to imagine that the war of words with North Korea was turning into something else. We hurried out of our hotel room thinking we would shelter in the lobby, before we remembered that lobby didn’t even have a roof. All around us people were screaming and crying, dragging children behind them, running every which way.  We looked at each other and decided to go sit together in a stairwell, holding hands. For fifteen minutes we sat, remembering all of the people that we loved, and reminiscing about all that we had done and seen together. We were grateful for our love, grateful that we’d found each other, even if our time was going to be cut short. Then we got the “All Clear.”

I’ve told that story many times. But I rarely talk about what happened next. 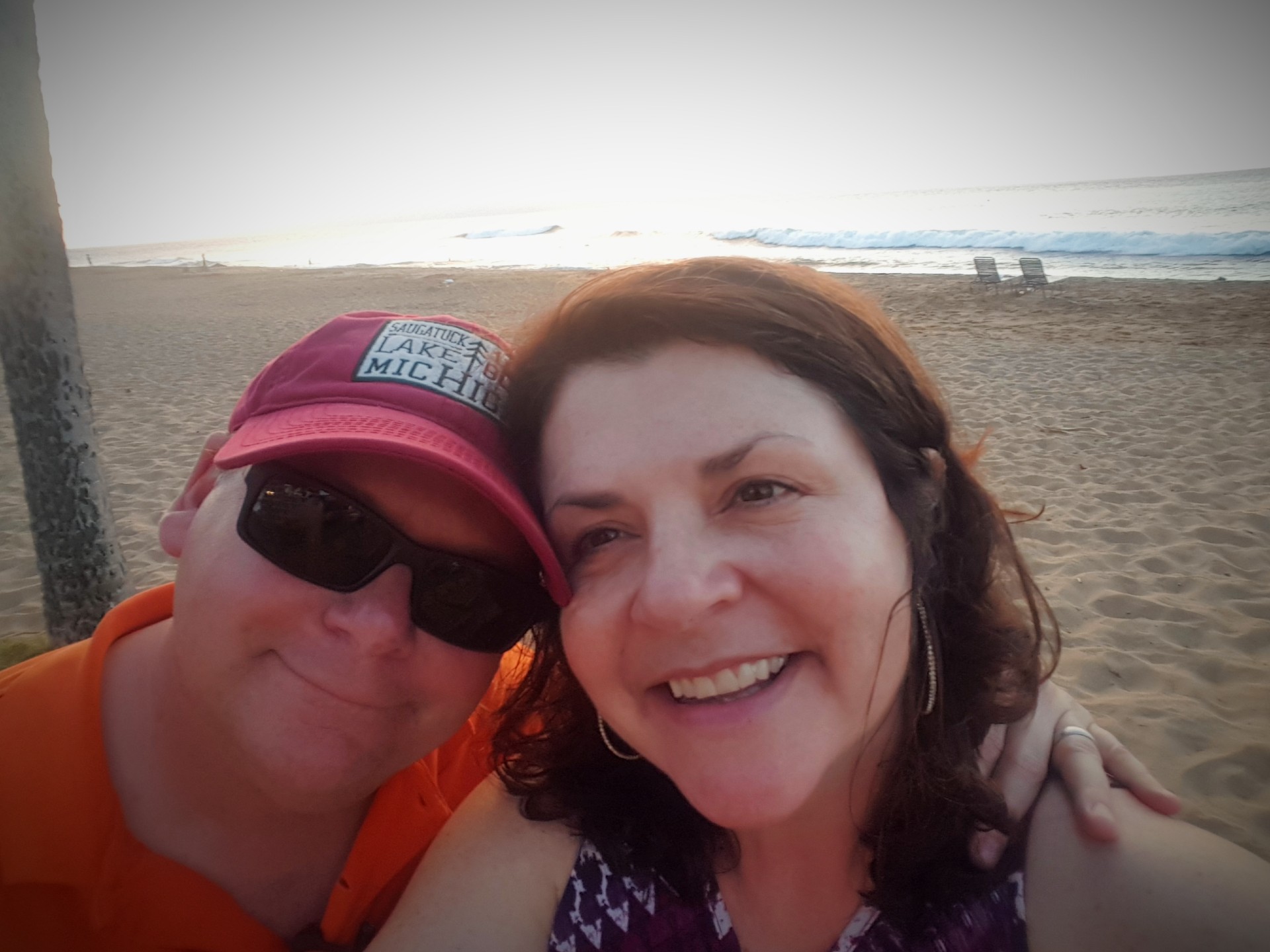 Us on the beach in Maui just after the “All Clear”

We, like just about everybody else in Maui, headed for the bar. At first, the relief was immense. But within about half an hour, we started getting prickly with each other. I felt like I wasn’t being heard, and Bob probably thought I was being needy. And the next thing you know, we’re having a fight. Not a BIG fight. But a fight. After what we’d just been through, that seems crazy, right?

Except I think it’s the way of things. Relief is a beautiful thing, but it’s a process, not a prize you win at a carnival. Processing intense emotions takes time, it isn’t always pretty, and it doesn’t always bring out the best in us. But it’s the only way through to the other side.

I am very much looking forward to being MAX VAX. But just because I get the “All Clear” doesn’t mean that I’m out of the woods. It just means that I finally have the space to process all that has been lost, all that has changed, and all that has happened in this last year. It’s a lot. For all of us. We all need to remember to be generous, patient, and spacious with ourselves and the people that we love, because we’re all processing, in our own way.

A paradox is a seemingly contradictory statement that rings true. MAX VAX means I’m free… to feel all the feels I couldn’t allow myself to feel while under threat. They’re going to own me for a while. And that’s okay. Relief is coming, if I just do the work.