Our Vice President of Marketing, Jamie Stepanian-Bennett, came to me one day and said, “I have a lead for you.” He had met a group of people who were doing mission work in Zambia involving an orphanage and a coffee farm. I had no idea where he was going with this, but I suggested we set up a meeting.

A couple of weeks later I was sitting in a room with Kim Cooke, Lee Davis and Jamie Flowers, the State-side principles of the Living Hope International project. Lee was the brainchild of the whole thing, Kim was passionate and an obvious ‘Maven’, and Jamie brought a passion for coffee and its production.

I was inspired by their story. They had (from scratch) created an orphanage in Ndola, Zambia that takes children out of the ‘bush’, usually at around the age of six, that have lost one or both parents to one of three main causes: Malaria, AIDS, or Alcoholism. They house, feed and clothe them. They give them health care and education. And they give them lots and lots of love.

But it’s not the kind of orphanage that looks to find other homes for its children. The idea is to keep them together, like a family in the orphanage, where the Living Hope staff provides stability and an education up to the 12th grade. From there, they’re placed either in University or job training.  Their commitment to each of these kids is that they can grow up to lead useful lives, and their skills and leadership will in turn help change their community for the better. It’s a tall order in a city (and a country) that is facing serious challenges, both socially and economically, and where most of the children of families that can afford it leave for greener pastures.

All of this is supported by an onsite coffee farm, also started from scratch, at about the same time as the Orphanage in 2009. The coffee is called Living Hope Coffee, and it is brought in as raw green product to be roasted and distributed here in the States. The concept is good, and they produced about 25,000-30,000 pounds of coffee in 2018. If they can roast and sell the lot of it, they could return that money to Ndola and build new dormitories to house more kids.

I could see right away, though, that getting it to Market and telling the story to a wide enough audience would be a challenge. I knew as we were talking that BIGGBY could help. I wasn’t sure exactly how, but what I did know is that I was going to Africa. As we were shaking hands goodbye, I was already thinking about my next two conversations, one with my wife Michelle Fish and my business partner Mike McFall. 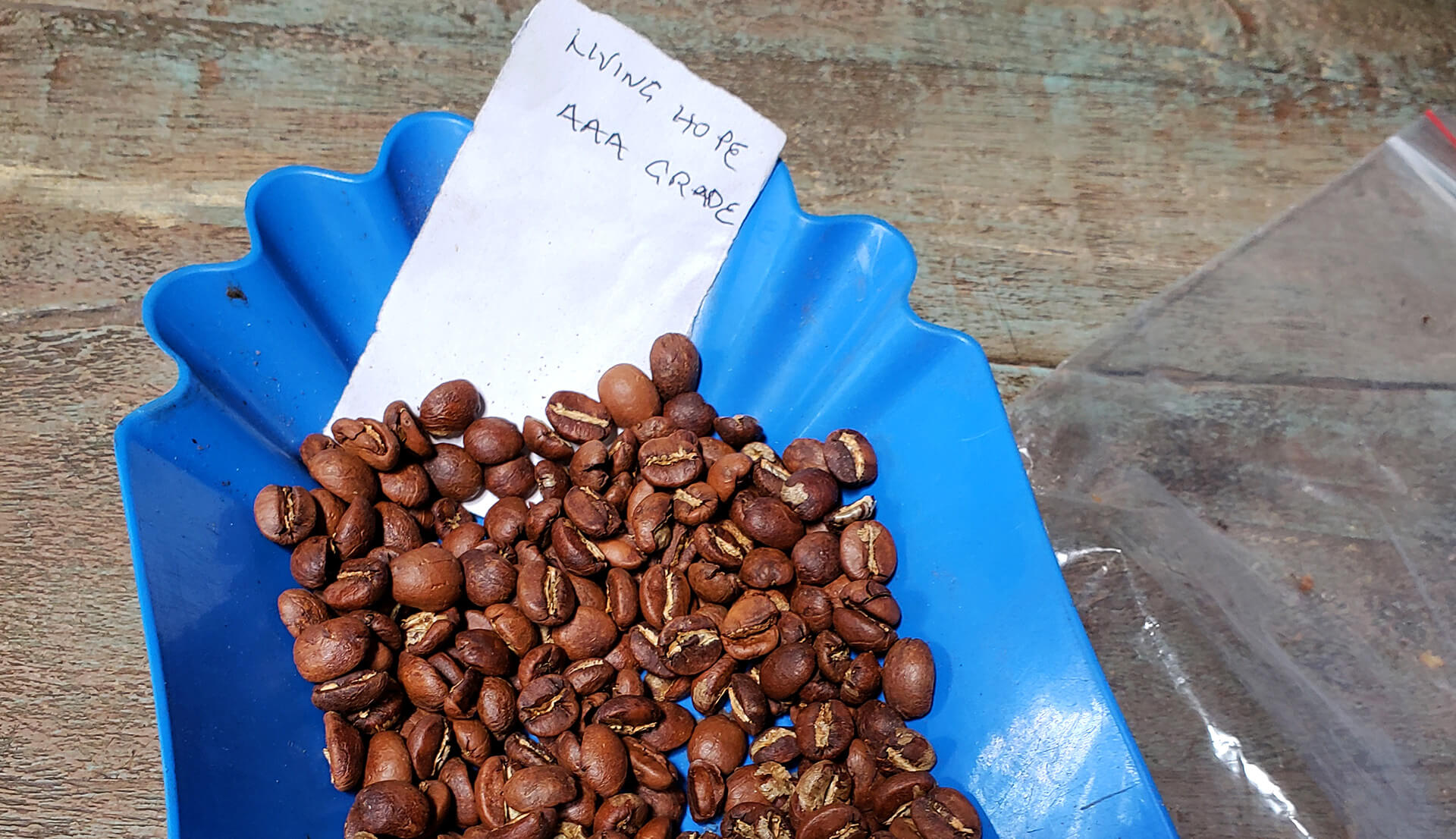 But first, the coffee.  At BIGGBY COFFEE we have always been driven by the quality and taste of our coffee. There was no question that the Living Hope mission was one that we wanted to support, but the coffee had to be good, too. The guys had left me some green bean samples which we roasted up. Unfortunately, the coffee was a little stale because it had been sitting around a while. But underneath that was a great coffee that would easily score above the mid 80’s.

I gave the green light to Michelle who is the travel genius, photographer, chronicler and my co-conspirator. Right away, she began working out visas and itineraries, booster shots and malaria medicine. Perhaps the biggest challenge was figuring out how were going to bring items to donate to the orphanage, and our own travel necessities, and get it all to fit into one carry-on suitcase each. But mission accomplished, and a cold December day just a few months later, we were on our way.

First stop, New Jersey, so we could catch a direct flight to South Africa the next morning. As we were about to board the flight to Johannesburg, Michelle looked at me and said “how on earth do we survive a 15 hour plane ride?”  “You just do,” I said… (READ:  In for the Long Haul), and we just did.

From Johannesburg we hopped on another two-hour flight to Ndola, Zambia. And then, about 36 hours after we locked our front door, we found ourselves exhausted but thrilled to be on African soil. We were on the other side of the world, baking under a blistering sun, taking the long, chaotic shuffle from the plane to the terminal.

On a day of many “firsts,” one stands out:  being thermally heat screened for Ebola, a necessity to protect the country from the outbreak in neighboring Democratic Republic of Congo. It took a while to get through it, and waiting for us on the other side of customs, immigration and passport control was a man named Davies (READ:  LOCAL HERO:  Davies Chipoya), and he is the one man that made all this happen. 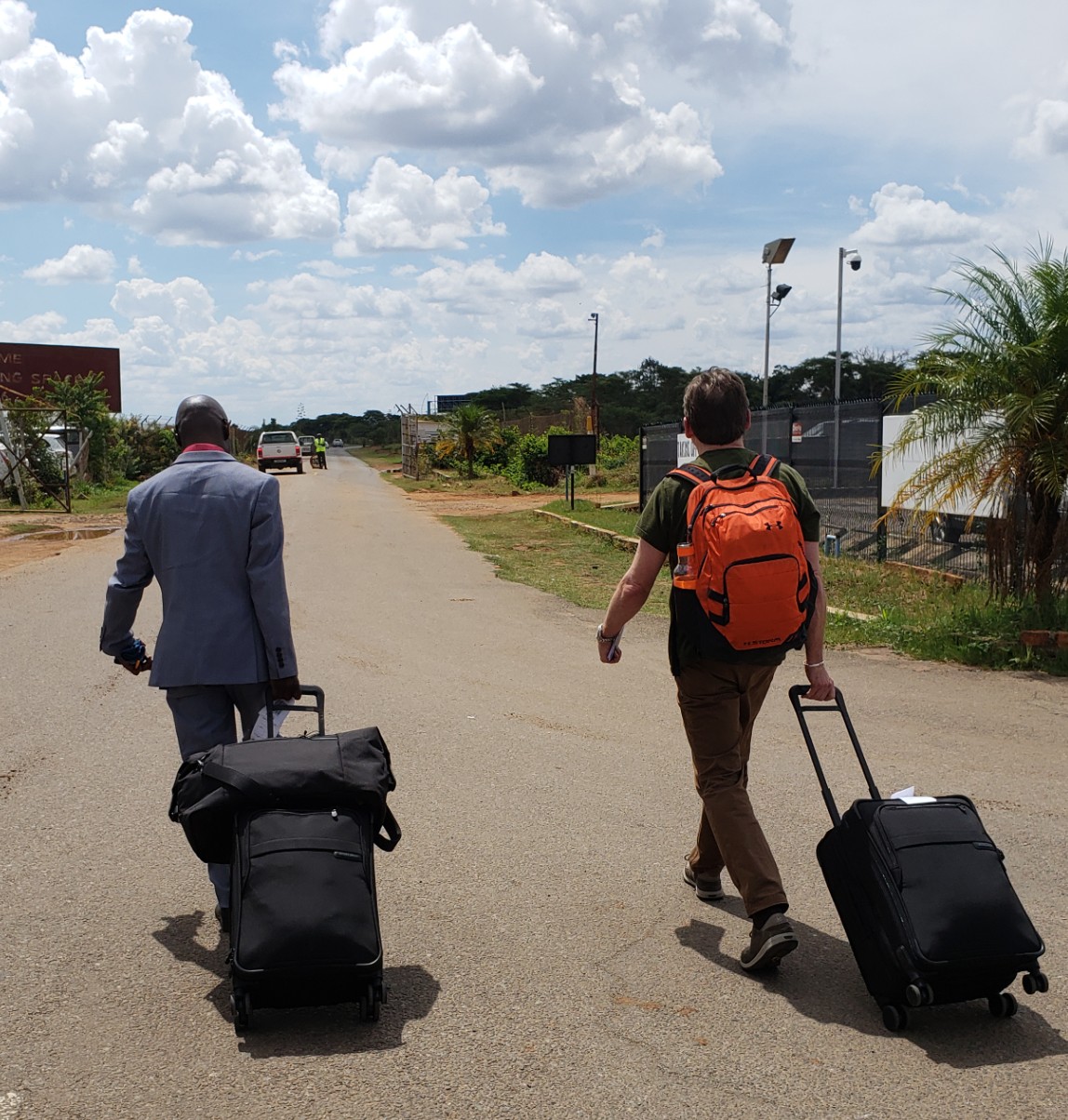 It was a Sunday and Davies had just come from church, and so he was dressed in a three-piece suit on a very hot day. I know he had pulled some strings in the airport to get us through as quickly as possible, and before I knew it, he had us in his late model Land Cruiser, heading towards the Orphanage and Farm. 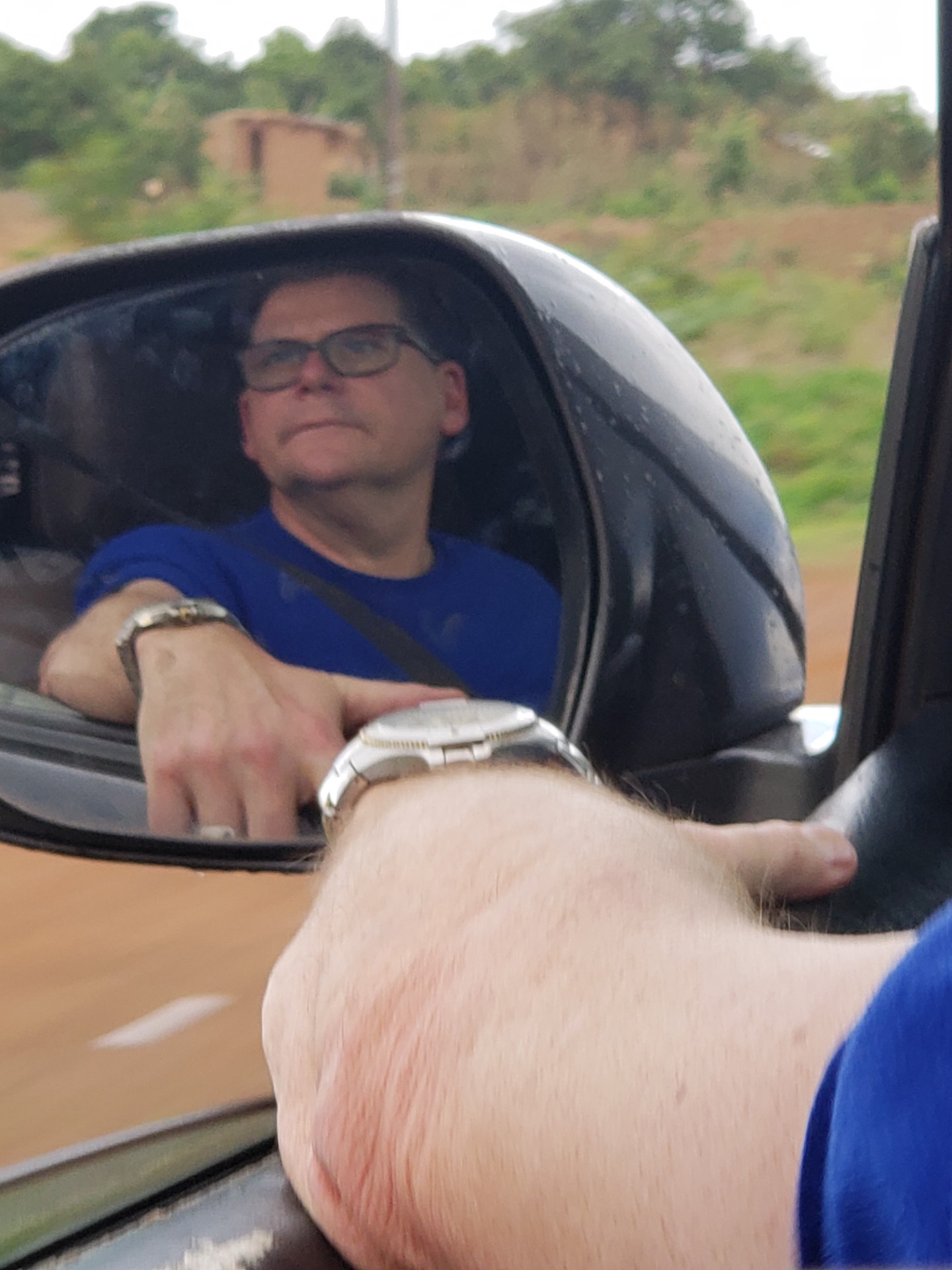 Davies is highly educated and speaks perfect English, and although we had only met minutes before, it’s as if we were friends already. We picked up a young man along the way who was a graduate from the orphanage, and who was coming home from work. Together, we bounced down the road with ease and wonder, soaking up the colors of the red dirt landscape and the vivid blue sky, chatting about soccer and pop music like we’d known each other for years.

The soil in this part of Zambia is a striking deep red, and though the landscape was sparse, it was dotted with what looked like giant red boulders.  Come to find out, those were actually ant hills, and they had a surprising benefit in the landscape.  (READ:  Making a Mountain out of an Ant Hill)